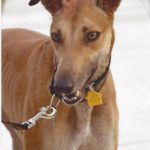 Many of you have met and greeted Layla, our rescued greyhound, on our walks each day. Want to know her better? Layla was adopted by Joan and I last March from Fast Friends Greyhound Adoption, Sarasota Kennel Club. She was born in Texas in August 2014. Her sire was Flying Coal City and dam was Bob’s Ikea. Yes, she does come from the world of greyhound racing. Her racing name was Bob’s Levy, named after a fund in England by bookmakers to help retired greyhounds. Her new name, Layla, recalls an early Eric Clapton tune.

Layla’s color is considered red fawn and she has a history of 28 races, winning 2 d place once.( I guess she was one of the greyhound “butterfly gazers” enjoying life rather than winning.) But her low winning average helped us to get her! After meeting her down at the Sarasota Racing Track, we knew she would be the perfect addition to our lives. Layla’s relaxed walks have helped me recuperate from a heart attack and she always keeps Joan and I laughing.

In Texas, Layla’s owner was Robert R. Stokes with trainer Louise Strong. Greyhounds and! Layla, in particular, are great companions for our retirement. For much of her life, she only knew a crate and racetracks. Now she is part of a family and a great community. She loves the people, dogs, and birds of Lakeridge Falls. Only the squirrels annoy her. I guess they are a reminder of the elusive little rabbit at the races.

But, the days of racing are over for Layla. Once great runners, greyhounds are now called “45 mph couch potates”. In the U.S , England , Australia and New Zealand, racing will soon be stopped. Once London had 77 greyhound tracks, now only 2 remain. Hopefully , all the rest of the retired racers will soon be leading a calm, peaceful existence in retirement. Like Layla!